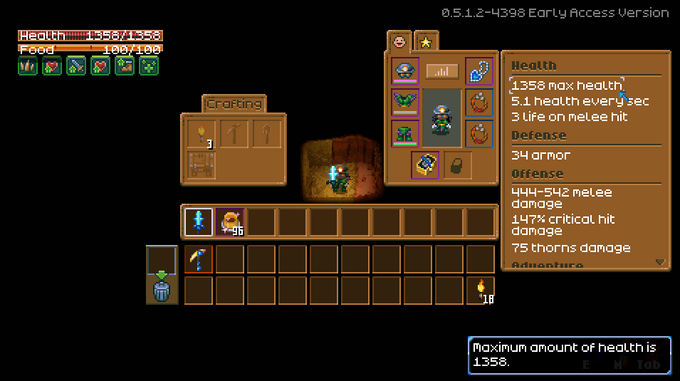 Screenshot of a character with the highest possible max health stat in 0.5.2.1.

Max (maximum) health is a character's complete health bar. While the current health level may be depleted by damage and refilled by healing, up to the amount of the max health stat.

Various sources can increase a character's max health stat, over the course of game progression. This guide explains all the ways to do this and shows off the highest character health currently possible after a fresh start.

There are several hard to find food items that permanently raise a character's base max health stat. Although they may be consumed multiple times, each one can only apply its unique permanent health buff once per character. The permanent max health foods may be cooked, but their buff does not scale up with dish rarity modifiers.

Old Giant Mushrooms and Amber Larva can still be applied an unlimited number of times. But they became impossible to acquire in worlds made since update 0.4.7.

Vitality skill experience, from killing enemies, adds one max health for each level in this skill, up to a maximum of +100 max health.

Maxed out! talent, at the top of the vitality skill tree, increases a player's maximum health by 6, 12, 18, 24 or 30 percent of the character's total number of levels across all skills. At most, with 5 points in Maxed out! and all 9 skill trees at the maximum 100 levels, that adds up to an additional +270 max health.

200Ancient Coins, will removed the health buff from Maxed out!. Until skill points are reallocated.

New characters have a +5% increased max health buff from being well fed. That is if their food bar is at 85% or higher.

Healthy diet talent in the Cooking skill tree increases the strength of the well fed buff by 20 to 100% (with 5 points in). This can double it from +5% to +10% increased max health.

Not so picky talent in the Cooking skill tree can reduce the food bar requirement for well fed down to 75% (with 5 points in).

Most Armor items and various Accessories give an increased max health when they are equipped. These items have the highest value for each slot:

Consuming the following foods gives an increase to maximum health that ends after a number of minutes, when the buff runs out.

Long-lasting food can increase the duration of these temporary food buffs by up to 30%. From 5 minutes (at base) increased up to 6 minutes and 30 seconds (with 5 points in the skill tree talent).

The buff from this uncookable food does not stack with the same buff type from cooked food. The last consumed currently overwrites any previously consumed, even if they were stronger and longer duration.

See the cooking ingredients list to see all food's buffs for each food.

The current highest temporary max health buff is +117 health. This if from combining Sandy Spikeback with a golden veg (or Starlight Nautilus), for increased rarity, and also getting a lucky Master chef talent proc on an bonus dish, when removing cooked food from a pot. Which elevates it again to epic (+50% increase to stats).

Adding up all the buffs from above, to find the highest character health currently achievable with a new character in a new world in Core Keeper 0.5.2.1: