Progression guide for items and bosses 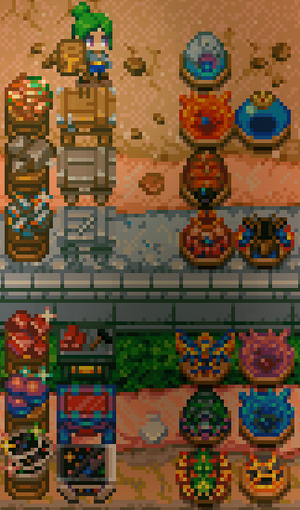 This guide is a walk-through for the necessary order of crafting and biome progression and suggested order of defeating bosses. It might be useful for new players planning ahead, or those checking back for content they've missed.

Standard type character is strongly recommended over hardcore, for all players. It is also recommended that new players start in a normal mode world. Hard mode currently doubles the health and damage of all enemies and bosses, for little to no pay-off. This requires highly optimised play, making use of all the best available gear, consumables and skill tree talents. Or an extreme degree of caution and cheesing the bosses.

Players can farm most skills with various AFK methods, to gain earlier advantage from some stronger buffs and useful talents. However, this is unnecessary in a normal playthrough. Especially since skill levelling was made substantially quicker in the 0.5 Desert Update.

Permanent max health foods have also been omitted. They are rare to find optional extras that will help make a playthrough easier by slightly increasing a character's base health.

This is not an achievements guide, but working through all the sections below could bag about half of them.

Boss order and world exploration are theoretically quite flexible, given this is a sandbox game. There is currently only one solid gate to progress: defeating the first 3 bosses. Which separates this guide into two parts.

Part 1: Powering up The Core[edit] 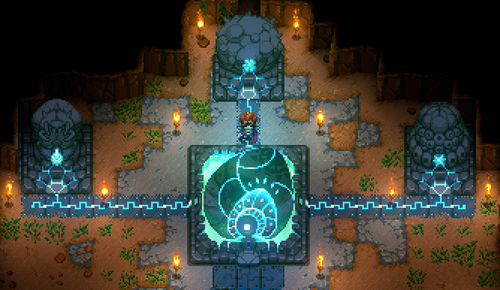 The Core powered up by the three Boss Statues

In the first part of the game, the goal is to power up The Core. This is done by activating all three boss statues connected to it. Each is associated with one of the first three bosses. Defeating that boss will drop an essence necessary to activate their statue:

Heart of the Hive Mother.

These three Boss fights can be attempted in any order, as soon as each boss is found. They're all pre-spawned into the world. Players may chose to prepare more by progressing through these first 4 tiers of equipment based on the materials found in the initially accessible biomes.

But beating bosses also drops good items, unlocks gear, weapons and other things that make it easier to explore and deal with randomly spawned enemies; the statues also act like a crafting workbench, each offering up 3 additional items to craft.

The workbenches chain from one to the next, as players progress through biomes and their ores. There is no requirement to beat bosses, initially.

Wood is easily obtained immediately from first spawn at The Core, in the centre of the Dirt Biome, by destroying Roots. Which are also found in most successive biomes.

Copper Ore is mined from Dirt Biome walls that sparkle in the darkness. Plenty of wood is also required, from exploration and/or farming roots.

Tin Ore is mined from sparkling Clay Walls. The Clay Caves biome surrounds one half of the Dirt Biome, beyond ~150 tiles from the core, at a random angle. Many items still require e.g. Wood or Copper Bar. Fiber can be looted from enemies and breakables in the biome, salvaged from spare gear, or harvested from the plant of the Grub Kapok Seed. Some Gold Ore may also be found, ready for the next tier of crafting.

Iron Ore is mined from Stone Walls and occasionally dropped by enemies in The Forgotten Ruins biome. This grey area is found on the opposite side to The Clay Biome, together fully surrounding the Dirt biome. Gold Ore, found in both stone and clay biomes, Iron Ore and Wood are also needed for crafting.

The Ruins' cities are a top tier source of

Mechanical Part, key for crafting valuable items throughout the next phase of progression. They are dropped from the dangerously coordinated Caveling Enemies and plentiful Large and Small Destructible Ancient Objects.

These bosses are both tough, so should be fought after acquiring gear from the Wilderness. 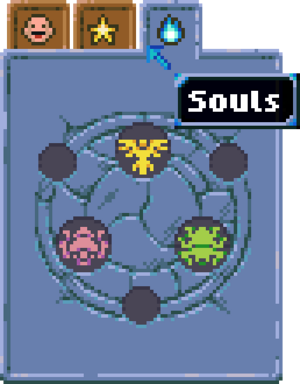 Souls tab of a character after defeating all titan bosses.

After powering up The Core, the player interacts to talk through a dialogue until they unlock their Souls tab and are imbued with the ability to drop The Great Wall.

In multiplayer, every player must talk to The Core, separately, to unlock their own Souls tab.

After travelling out to touch and drop the unbreakable barrier wall, players can return to speak to The Core for a second time. This yields a brief description and approximate compass direction for the first outer biome: Azeos' Wilderness.

Scanners can can be crafted at the

Spirit Merchant (technically traded). Each of these marks the exact location of an outer biome boss spawn. Each scanner recipe uses a resource unique to the boss's biome. Either found on the ground or as a mob drop.

Unlike the first 3 core progression bosses, each Titan boss must be summoned before it can be fought for the first time. All 3 have consumable summoning items, also crafted at the

Ancient Hologram Pod, housing the Spirit Merchant. Each summon requires an amount of that biome's unique ore, smelted. So mining the walls or boulders is a requirement.

Because access to all 3 outer biomes is given simultaneously, these infinite biomes can, in theory, be attempted in any order. As can their respective Titan bosses. But it's strongly suggested to take them on in the order listed below, due to the workbench upgrade chain, mining damage and mob and boss difficulty scaling.

Upon defeating them for the first time, each of the 3 titan bosses gives the player a unique new soul power ability:

Soul of Ra-Akar. Once a power is collected, the boss's sigil is added to the Souls tab of the character screen. Each sigil can be clicked to toggle that ability on or off.

In action, each ability resembles one of the boss's attacks. They are triggered at random, by doing damage to any creature (including NPCs), potentially causing additional damage. Making them most useful against groups of mobs or bosses, that take many hits.

Scarlet Ore is mined from the tough Grass Walls and processed into bars using the Smelter Kiln, to craft:

Octarine Ore is mined from Limestone Walls and Ore Boulders on islands, then smelted to craft:

These are both very difficult boss fights that are better to be well prepared for:

Part 2.3: The Desert of Beginnings[edit]

Galaxite Ore is mined from some Sandstone Walls and Galaxite Ore Boulders, mostly found inside those walls, too. Its crafted into Galaxite Bars via the Fury Forge.

The main story is unfinished. The game is still under development and it's being updated regularly.