Heart of the Hive Mother, one of the three items required to power up The Core. Once emplaced in its Boss Statue, the world save file is marked with this item icon.

Hive Mother Scanner can be used to locate its position on the map. It spawns approximately 330 tiles away from the core at a random angle. That is about 1.5 times further than the radius of Ghorm's track.

To respawn the Hive Mother after it has been killed, place

Hive Mother Summoning Idol on its rune circle. The idol can be purchased from the Caveling Merchant for 500

. The merchant will restock their items after some time has passed.

The Hive Mother will only aggro on the player after taking damage. This allows players to approach and to prepare the area before starting, or restarting, a fight. 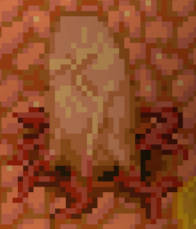 A Hive Mother Egg, with 1335 health, about to burst

The Hive Mother attacks by shooting an acid bomb at your target location, marked by a red circle. These create

Ground Acid Slime, which deals damage over time. She only shoots acid bombs at players within 15 tiles of her centre. While she will reset to full health and no aggro if players are beyond 20 tiles of her centre for 10 seconds. Past the point at which the music changes from boss fight to ambient.

Periodically, Hive Mother spawns Cocoon like Eggs from five tentacled spawners surrounding her. If not killed quickly, these will explode, releasing tougher variants of

Acid Larva. These additional mobs do not drop any loot or directly attack torches.

At 60% health Hive Mother will enrage, increasing the frequency of her attacks and cocoon spawning.

Green Blister Head as an ingredient. They are easy to catch and the immunity buff lasts for 5 minutes. Add

Yellow Blister Head to the same dish to negate the slime's slow effect, too.

Conveyor Belt will cover acid slime and block its damage to players. Permitting dodging back and forth, or circling all the way around, over the same area. Acid Ground Slime also fails to form on

The five Egg spawners around the Hive Mother can no longer be walled off, to avoid being overwhelmed by adds; the Boss variant of the Big Hive Larva will break the toughest walls in one hit. 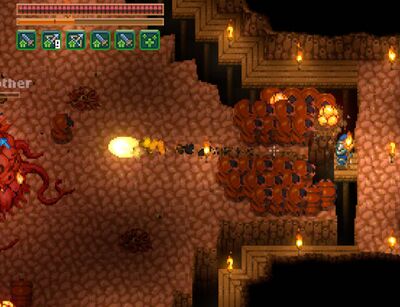 The safest strategy is to dig a trench, at least part, if not all, of the way around the outside of the Hive Mother's chamber. Where the floor becomes breakable. Then use a ranged weapon to chip her down. Possibly

To make player sight-lines to the Hive Mother easier, the Hive Larva mobs can be concentrated in a specific part of the perimeter by extending the interior area into a spur. A notch of trench in the middle of this will give a clear line of sight through the mobs (as shown in the image). Standing 13 tiles beyond the edge of The Hive Mother's hit box (15 from her centre), avoids her mortar attacks. The edge of her health bar will be just visible, if players position left or right.

For a melee only approach (more challenging), use

Rug all around the Hive mother, with

Spike Traps too, to help deal with crowd control. Once the Hive Mother has been killed for the first time, spike traps can be placed under most of her spawn position. This will make farming her very simple.

If taking too much damage, try to wear either armour from the Iron Anvil and/or Carapace Armor from Ghorm's Boss Statue. Equip any

Ring of Rock or other defensive rings or necklaces.

Healing Potions on hand to drink as needed. Also,

Stoneskin Potions for 34 added armor for 60 seconds. These stack with buffs and healing from food. So be sure to eat Cooked Food including

With minimal adjustments, the above (ranged) setup can double as a way of farming combat experience. Using the plentiful Hive adds to gain Melee, Ranged and Vitality skill points, without any danger to the player.

To optimise for this, first bring the Hive Mother down to about half health, so that she is enraged and spawning mobs faster. In later game, Conveyor Belts can be deployed to speed up gathering mobs from the far side.

For AFK melee skill farming, the mobs can be punched across a diagonal corner with a mouse button held down. Or rebound to keyboard or software macro. For ranged skill, a weak weapon like the Slingshot should probably be used, to avoid killing all the mobs too fast. Many instances of the weapon can be made and left in inventory, so that they are automatically switched to when one looses all durability.