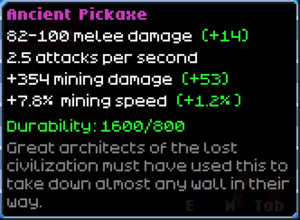 Example of a reinforced tool

Salvage and Repair Station, and it will cost some of the item's base materials. Only tools and equipment with durability can be reinforced.

By reinforcing tools or equipment, it will do the following:

The reinforcement status is not permanent. It will only last until its durability is halved, back to its base value, and then all of the extra damage and stats will disappear. You can still reinforce it again once it's no longer reinforced.

Water is randomly generated, existing in empty tiles without grounds. It cannot be created, only removed or spread around. You can spread water by removing the ground next to it while placing grounds on water will remove it. There is no limit on how many tiles the water can spread regardless on how small it originally is. When different types of water collide, water with higher strength value will overwrite the weaker one, as seen on table below.

Hard mode is an optional difficulty option available during world creation. Once chosen, it is tagged into the world save file and can't be changed in-game. Changes for hard mode:

While the game becomes harder, bosses will drop more items. The amount of rolls bosses drop are now multiplied by 1.5. Hard mode has no range of rolls on its own, instead it uses normal mode's roll value, multiplies it by 1.5, and then rounds the number. Certain roll value might be skipped due to rounding. The number of equipment roll stays the same at one. See Glurch the Abominous Mass for example, excluding guaranteed items, it has 3 possible roll values:

Regular Enemy mobs do not have increased health or damage stats. But each player spawns as many new mobs around them as they would in single player. So 2 players in the same place should effectively double the spawn rate there.

Boss health is scaled up according to the number of players connected to the world. The amount of scaling is different for each boss.

Off-hand is an equipment slot. Certain off-hand items can be used actively. There are two types of active off-hand items: shield and dash. 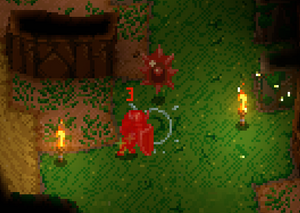 Example of blocking with shield

Shields, e.g. Wooden Shield, can be activated by holding space. There is no time limit or cooldown associated with the shield, players are free to activate shield as long as they want, whenever they want. You cannot move while activating shield.

Any damage you take while shielding will be reduced by the amount listed on the shield. Shield works against damage from all angles. Unlike other off-hand items, shields have durability and therefore can be reinforced. Its durability will only decrease when taking damage while the shield is actively blocking.

Dash can be activated by pressing space. It will give you a burst of speed forward.