This guide explains notable aspects of starting a Core Keeper playthrough. It highlights significant menu options, then walks through the initial game progression and lists many quality of life tips that are not obvious.

World and character saves are stored independently of each other, in different save files. So characters can visit multiple worlds at any time, locally or remotely hosted.

Multiplayer is natively supported, without needing a dedicated server. More than the officially stated 8 players can connect to a world at the same time.

Boss health and their characteristics are scaled up, in multiplayer, by the number of players connected to a world. The amount of extra health bosses gain, per player, diminishes witch each additional player. Enemy health is not scaled, but more of them will appear over time, because they are spawned around each player. 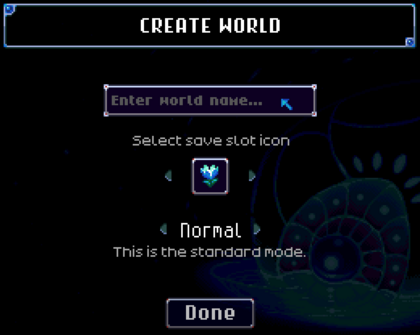 To play in your own world, select Start Game from the main menu. This opens the Select World menu. Picking an empty slot leads to the Create World screen.

To play in a friend's world, instead, select the Join Game option from the main menu, to enter the game ID. Or use the Steam friends list to join a specific contact already in game.

After creating a world, the name, icon and difficulty can not be modified from within the game. However, they can be changed using third party apps or by manually editing some plain text in specific save files.

Worlds are either Normal or Hard difficulty. In hard mode worlds, all enemies and bosses have their base health and damage doubled. This makes the game substantially more challenging: many later game mobs can one-shot players and optimal strategies are often required, utilising all aspects of gameplay.

The only advantage of hard mode is 50% more loot slots in chests from defeated bosses. There are no unique hard mode items. 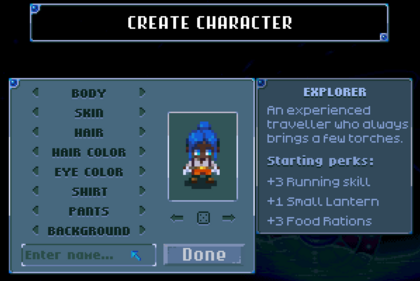 The Create Character screen then takes input for a name and various aesthetic choices and character. Again, none of these settings can be changed from within the game, without mods. But character files can be deleted via the Delete progress options in Settings.

Background picks between a few different starting load-outs and item perks. The amount of skill points awarded are somewhat negligible and the items are all easily obtainable within the first hour of play. So this will not affect the game in the medium to long term; there are no true character classes.

Specialisation between players is limited to variation in accumulated skill points, awarded for doing each of the 9 activity types. This gives improved base stats for those activities and access to reconfigurable talent perks in the skill trees.

You start the game in front of an ancient machine called the Core. You have to power it up by activating the 3 effigies next to it. There are 3 bosses in the starting areas that will drop 3 items needed to activate them. 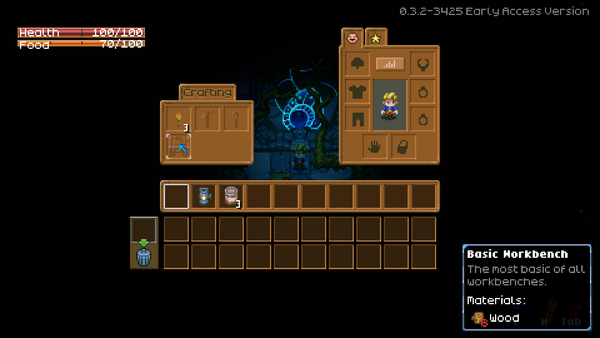 Destroy the roots surrounding the Core to collect them. You can use

Wood to craft several basic tools. Press Tab to open your inventory and status menu. From there, you can craft 4 items:

Craft those items by clicking on them. Place the workbench on the ground and then interact with it to open up the crafting and inventory menu. These new tools are your next target to craft. In general here's how the upgrade loop works:

Use your Wood Pickaxe to destroy the walls of the Dirt Biome, exploring and expanding your territory. Glittering sparkles within the darkness will show you where to go: a column of rising glitter leads you to an open room with a lake or a growing plant, while larger, more static sparkles show valuable minerals like

Copper Ore buried in the walls. Collect Copper Ore as you find it, process it into

Furnace, and craft your first metal tools at the

Once you obtain copper tools, you should head out to The Clay Caves, where you can obtain

Tin Ore. If you head out in one direction from the Core, you will encounter a chasm surrounding the Dirt Biome, which you can easily cross using

Once you reach the Clay Caves, mine for enough tin ores to craft

Tin Workbench and their tin tools and equipment.

Now head to The Forgotten Ruins. If you didn't find it earlier, you can either head back to the Core and mine in the opposite direction, or go "sideways" through the Clay Caves, traveling in a large circle around the Core.

You may occasionally obtain

Gold Ore while mining the previous tier, since you can obtain them on the clay caves and the forgotten ruins. Tier 3 is where you can finally use them, along with

Iron Ore. Once you have enough gold and iron ores, craft all available tools and equipment from

There is no higher tier you can reach before you defeat the 3 bosses. So this is the time to kill whichever bosses you haven't killed yet.

Glurch spawns in the Dirt Biome. Approximately 65 tiles from the Core, in a random angle. When you get close, your screen will shake periodically.

Glurch Eye when defeated, one of the three items required to power up the Core. Go back to the Core and place the eye on Glurch's effigy. Once activated, you can interact with it as a workbench, opening up more crafting recipes.

Ghorm spawns approximately 250 tiles away from the Core. Unlike other bosses, Ghorm is constantly moving, circling the Core, moving between the clay caves and the forgotten ruins, destroying everything in its path. Since it's always circling the Core, it doesn't matter which direction you go, you will always end up reach Ghorm's track. The track is approximately 8 tiles wide, filled with ground slimes.

Check Ghorm the Devourer page for strategy. Ghorm will drop

Ghorm's Horn when defeated, one of the three items required to power up the Core. Go back to the Core and place the horn on Ghorm's effigy. Once activated, you can interact with it as a workbench, opening up more crafting recipes.

The Hive Mother spawns in Larva Hive Biome, a sub-biome of The Clay Caves, approximately 330 tiles away from the Core. But you can use

Hive Mother Scanner to locate its position on the map. The scanner can be crafted by interacting with Glurch's effigy, once you have activated it.

Heart of the Hive Mother when defeated, one of the three items required to power up the Core. Go back to the Core and place the heart on the Hive Mother's effigy. Once activated, you can interact with it as a workbench, opening up more crafting recipes.

Once you have activated all three Boss Statue effigies, the Core will power up, and your journey to the infinite world of the underground will begin. The Core will give you a hint on where to go next.