Automation is the technique of making a certain process operate with little to no input from the player.

Most machineries require electricity to function. Electricity is created by a

Pressure Plate. It can then be spread around either by using

Electrical Wire or by placing a machine next to another electrically charged machine. Once a machine is powered, notches on the four sides of the base of the machine will glow yellow.

Electricity is transmitted at full power over a path length of up to 18 conducting tiles from an Electricity Generator, 6 from a Lever or Pressure Plate. It will then fall off in power level over a further length of 5 tiles, causing connected lamps to illuminate less brightly. All machines decrease the transmitted power level by one, as a tile of wire would.

Drills, Arms and Doors all work normally at any power level. Delay Circuits will pass along a lower powered signal. As will Logic Circuits, unless they have a higher power level on another input. In this way, they can act as a relay, boosting the power of a signal. Levers are player activated switches that will pass through generator's higher power signal, as well as generating their own power.

Because boulders now produce 1800 ore, the output storage of the above (right) Smelter Kiln would fill to 999 and stop working, if not emptied in time. Using another robot arm to empty the output into a Chest would ensure all ore is processed automatically. 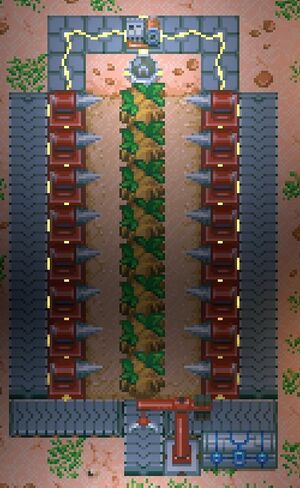 Coral Wood can be similarly farmed, when grown from Coral Seeds in hoed Beach Sand Ground. Designs are possible that use far fewer drills to harvest wood at the same rate.

Example of a very small and inefficient manual mob farm that uses Chrysalis to spawn Larva, Big Larva and Cocoons, for their drops and ranged or melee experience. 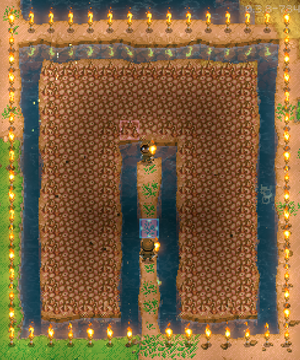 Orange Slime farming can most easily be automated by placing any number of Spike Traps in their enclosure. Mobs mostly wonder around randomly, and Slimes will aggro on any trap that hits them, causing them to jump on it repeatedly.