Giant Mushrooms are a consumable and cooking ingredient that will give a player +25 permanent max health. This specific effect can only be applied once to each character. 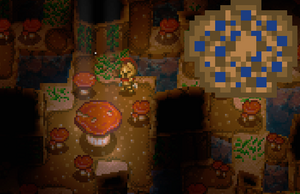 Individual Giant Mushrooms are spawned randomly in Dirt Biome and The Clay Caves biomes during map generation, with a probability of 1 in 3300 per ground tile. They will be surrounded by a few randomly placed regular mushrooms.

The best method for farming them is to create new worlds to quickly raid the dirt biome using a Grubzooka. Expect 1 to 3 in an entire dirt biome and perhaps 2-5 per world, possibly including their set piece scene.